Millet is tiny in size and round in shape and can be white, gray, yellow or red. The most widely available form of millet found in stores is the hulled variety, although traditional couscous made from cracked millet can also be found. The majority of the world’s commercial millet crop is produced by India, China and Nigeria.

It is a delicious grain whose consistency varies depending upon cooking method; it can be creamy like mashed potatoes or fluffy like rice. Additionally, since millet does not contain gluten, it is a wonderful grain alternative for people who are gluten-sensitive. 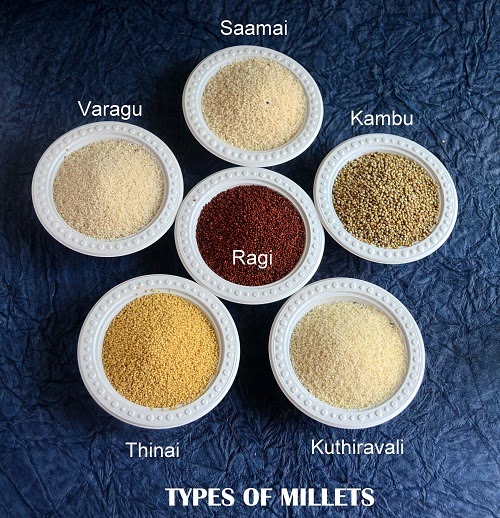 Pearl millet known as Kambu in Tamil has 8 times more iron than rice does. It is a great body coolant.

Finger millet popularly known as Ragi is also called as wonder grain as it is a powerhouse of essential amino acids and calcium.

Foxtail millet is thinai in Tamil. This is high in carbohydrate but also rich in fiber.It helps us to keep our body strong & immune. It helps to control blood sugar & cholesterol levels.

Kodo millet is known as varagu in Tamil. It is rich in phytochemicals, that plays an important role in preventing cancer.  Barnyard millet known as kuthiravali has 6 times more fiber in comparison to wheat.

Little millet known as saamai is a wonderful millet which is suitable for people of all ages and can be incorporated in different dishes.

How to Select and Store

Millet is generally available in its hulled and whole-grain form. It is available pre-packed as well as in bulk containers. Just as with any other food that you may purchase in the bulk section, make sure that the bins containing the millet are covered and that the store has a good product turnover so as to ensure its maximal freshness. Whether purchasing millet in bulk or in a packaged container, make sure that there is no evidence of moisture.

Store millet in an airtight container in a cool, dry and dark place, where it will keep for several months.

Tips for Preparing and Cooking

The Healthiest Way of Cooking Millet

Like all grains, before cooking millet rinse it thoroughly under running water and then remove any dirt or debris that you may find. After rinsing, add one part millet to two and a half parts boiling water or broth. After the liquid has returned to a boil, turn down the heat, cover and simmer for about 25 minutes or it can also be pressure cooked. The texture of millet cooked this way will be fluffy like rice. If you want the millet to have a more creamy consistency, stir it frequently adding a little water every now and then.

To impart a nuttier flavour to the cooked millet, you could roast the grains before boiling them. To do this, place the grains in a dry skillet over medium heat and stir them frequently. When they have achieved a golden colour, add them to the boiling cooking liquid. 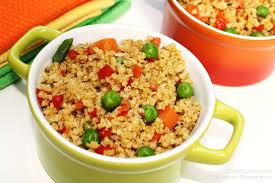 Regularly adding millets to our diet is a great way to prevent heart and blood vessel disorders.

Today, the talk of the town is how to make healthy lifestyle choices and how to keep the heart young forever. We can successfully stay away from heart diseases by focusing on some simple prevention strategies. If there’s one number your heart is closely connected to, it is the number hundred – yes the magic number that you need to remember is 100!

To begin with, all of us aspire to live a 100 healthy years and rightfully so. If we have survived the most critical phase of life – from a single cell to a healthy little human– we are most likely on the path to making a century! Our body and our organs are capable of functioning well beyond a 100 years; however, there seem to be several unfathomable hurdles in this journey to which most of us succumb. Nevertheless, there are men and women among us who have effortlessly and graciously lived for over ten decades. In fact, the term used to identify demographic or geographic areas in the world where more people than normal are living beyond hundred years is “Blue Zones”. Research in these peoples has shown a close link between their lifestyle choices and their longevity (if you’d like to know more on this, Dan Buettner has authored two interesting books on the Blue Zones in the last decade. I’ve read the first one and would definitely recommend it). 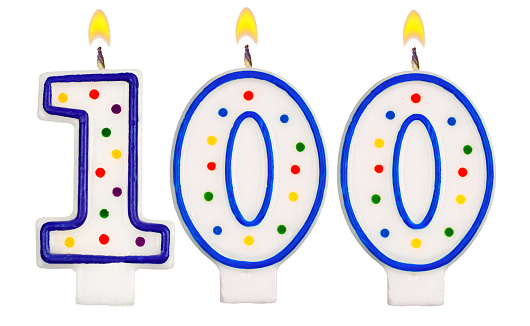 Fasting blood sugar is nothing but the sugar level in our blood after overnight fasting, which in other words is the level of blood sugar in an empty stomach and approximately 10-12 hours after the previous meal. Insulin is the hormone that regulates the sugar levels in the blood and any dysfunction or insufficiency of insulin – known as diabetes – hampers this delicate balance. The cut-off for normal fasting blood sugar is 100 mg/dl, the normal range being 70-99 mg/dl. If your fasting blood sugar value is between 100 and 125, you have a condition called pre-diabetes, which if left alone will progress to full-blown diabetes. The best way to convert from pre-diabetes to a normal health condition is by intensive lifestyle modification.

Dyslipidemia or abnormal blood cholesterol level is an important link in the coronary block mechanism. The optimal level of low-density lipoprotein (LDL, bad cholesterol) in our body is less than 100 mg/dl. Triglycerides, the body’s energy reserve, should ideally be below 100 mg/dl although 150 is the official cut-off. The level of high-density lipoprotein (HDL, good cholesterol) should be over 50 mg/dl as at that level it is protective against coronary heart disease.

Coming to the issue of body weight, many of us at some point in time would have planned to shed a few kilos (any may have succeeded or given up on the plan). The ideal body weight is calculated by simply subtracting 100 from your height (in centimeters). The ideal weight of a person who is 165 cm tall is approximately 65 kilograms (165-100=65). At this weight, the body mass index (BMI) of the person will be within normal range too.

So dear friends, let us start thinking and acting proactively to keep the risk factors for heart disease at bay. Whether it is the three silent killers (diabetes, hypertension, dyslipidemia) or your body weight or your heart rate that you want to maintain within healthy limits, just keep in mind the number 100. By making some simple and easy lifestyle changes, we can all ensure we live beyond a hundred healthy and happy years!

Exercise is the most important aspect of life for staying healthy and being active for all human beings irrespective of age and gender. It helps and improves the functioning of the whole body in a much better way. The activity of exercise enhances the fitness of the body physically and mentally. If you have observed heart patients, most of them are advised to do exercise to overcome the risk of heart attacks or cardiac arrest further. One should not forget that heart patients are only eligible to do some particular exercises and not all are applicable and advisable for them. 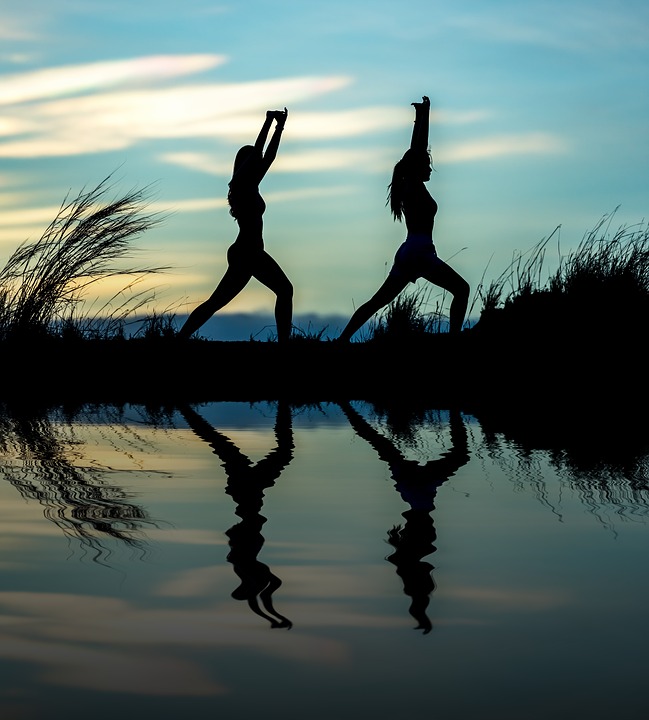 There are different types of exercises for Heart Patients to follow:

The simplest, yet an effective exercise for a heart patient is walking. It can improve the energy levels and keep them active throughout the day. It is the basic step towards the journey of beginning an exercise.

Aerobics plays an important part of exercise as it is highly advisable for almost all heart patients with mild movements. It shows better results in a very short span of time.

Cycling is the best remedial exercise for avoiding heart problems. The heart patient based on their health condition can either use a regular cycle or stationary cycle. Water aerobics and water cycling helps a lot for heart patients and relieves them from joint pains.

Stretching is important exercise for heart patients as it makes the body muscles flexible and increases your range of mobility. Also stretching the arms and legs after the exercise helps the patient to relax and avoid any muscle strain or injury.

Strength Training is also a part of exercise program where patients start with low resistance and gradually increase to higher resistance.

Flexibility exercises are very simple and unique for heart patients like neck exercise. It relaxes your body and helps to improve your flexibility. 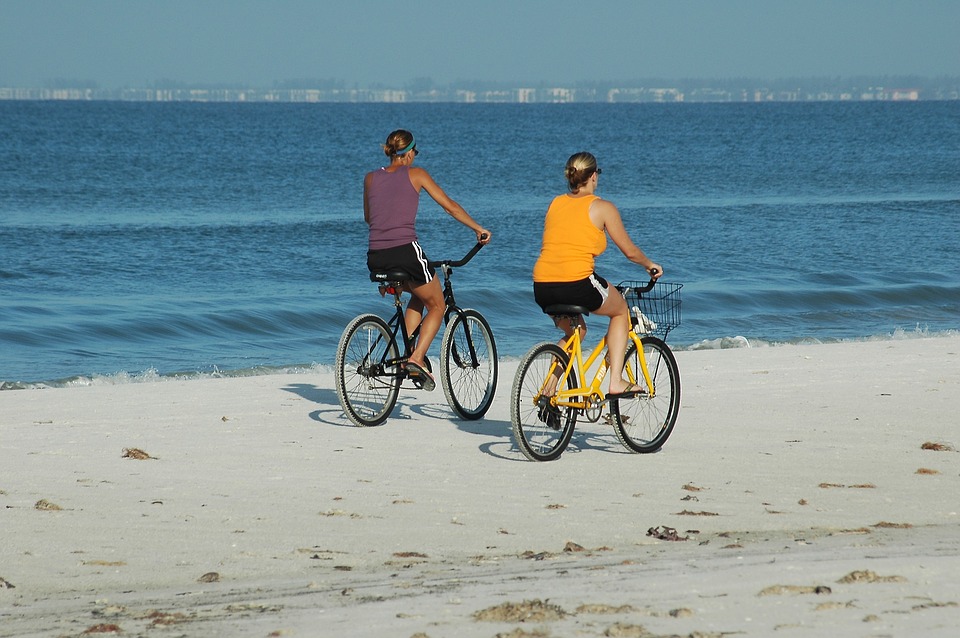 Precautions for Heart patients while exercising:

Isometric exercises like push-ups and sit-ups should be avoided for heart patients as it strains the muscles and increases blood pressure rapidly.

It is not advisable for heart patients to do exercises in extreme temperatures like too cold, hot or humid. Avoid extremely hot and cold showers or sauna baths immediately after the exercise as it might affect the pressure on heart.

Note: Any exercise chosen by heart patients needs to be strictly followed under the guidance of physician/physiotherapist

To know more details about the exercise for heart health please mail us at info@cardiacwellnessinstitute.com